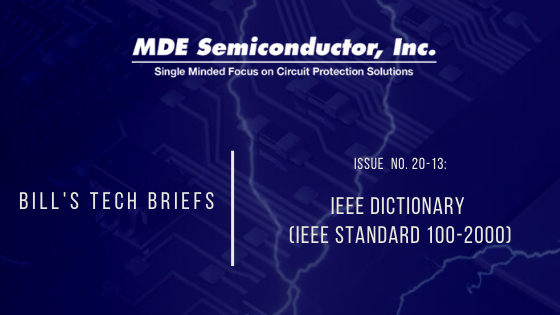 Surge Arrester         A protective device for limiting surge voltages on equipment by diverting surge (AC Power Circuits)   current and returning the device to its original status. It is capable of repeating these functions as specified

Surge Suppressor   A Device operative in conformance with the rate of change of current, voltage, power, etc., to prevent the rise of such quantity above a predetermined value.

Transient                   That part of the change in a variable that disappears during transition from one steady-state operating condition to another, such as a voltage or current.

Transient                            Capacitors, resistors, or Inductors so placed as to control the discharge of suppression  stored energy banks. They are commonly used to suppress transients Network caused by switching.

Waveform                 A manifestation or representation (i.e., graph, plot, oscilloscope presentation. equations(s), table of Coordinate or Statistical data, etc.) or A visualization or a wave, pulse, or transition,

This Tech Brief is brought to you by MDE Semiconductor, Inc. – your source for Surge Protection products. We value your feedback to enable us to supply better products and assist our customers to easily solve their problems.