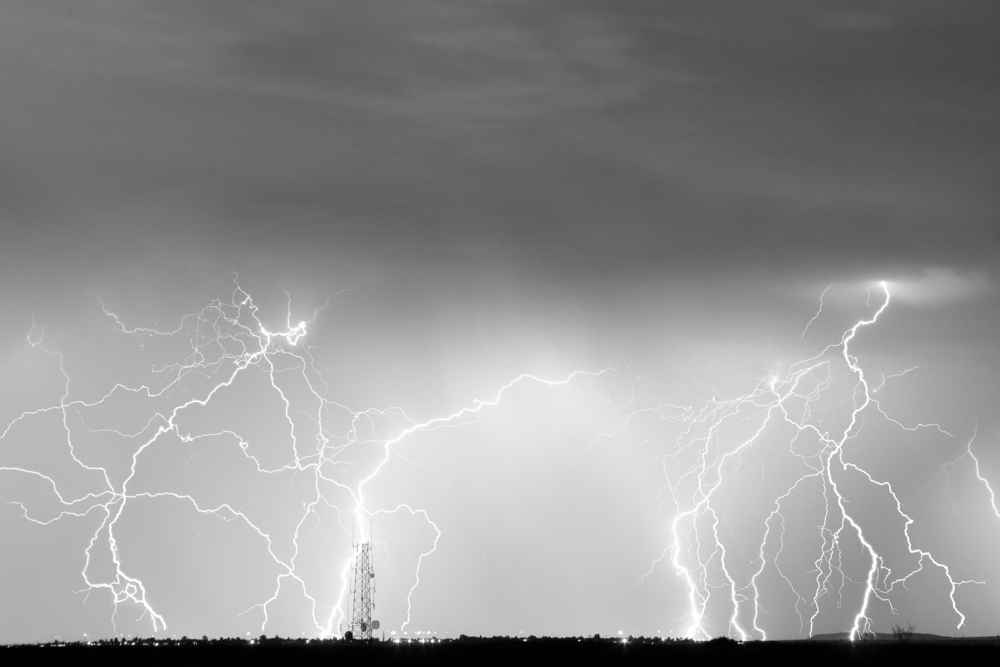 The digitization of every aspect of our lives puts a spotlight on the infrastructure that makes it all possible. Business, social and personal activities are impacted by our connectivity and the ease with which we share data, especially on mobile. Even though new technology is coming up to address limited coverage, faster speeds and the need for more capacity such as device-device (D2D) technology, cell towers remain the foundation for wireless service, and are not close to becoming obsolete.

Cell tower infrastructure runs to millions of dollars and is required to deliver functionality with high performance for providers to get returns on their investment. Factor in customer expectations for reliable and superior connectivity at low prices, combined with pressure from competing providers, and any damage from power surges effectively eats away at potential profits.

Of all the sources of damaging spikes and surges, nature’s fury in the form of lightning strikes is potentially the most destructive. The resulting downtime has cascading effects including equipment replacement costs and unhappy customers at the edge of jumping on to other networks.

MDE Semiconductor, Inc. specializes in the manufacture and design of components found in surge protection devices for telecommunications infrastructure. Protecting against peak pulse currents up to 10KA (8/20 u sec), our MAX-40 series of TVS diodes defend against the kinds of induced surges related to lightning strikes. We also provide customizable products to meet the ever evolving needs of mobile operators and equipment suppliers eager to provide the next generation of connectivity. Stay protected with our superior range of products.

There are more than 200,000 cell towers spanning America, and lightning strikes are largely an undesirable but inevitable phenomenon to cellular carriers. These towers stand tall between 50 to 200 ft. Others as high as 2000 ft. are often isolated, making them very likely to be struck by lightning. Plus, atmospheric conditions like high humidity and warmth contribute to the prevalence of lightning strikes in South Eastern regions in the summer.

A direct hit can release as much as 100,000 volts (possibly even more at times), which is enough to decimate unprotected equipment. Knowing exactly when and where lightning may strike is not a strict science even after tireless research. Besides, the indirect/secondary effects of lightning can generate voltage surges that are equally as devastating, and the lightning event need not be close by for the effects to be felt. As a result, lightning-induced surges are highly frequent.

The high levels of interconnectivity in today’s telecoms infrastructure also creates an ideal environment for induced transients to propagate. Earthed wiring can conduct voltage spikes in the aftermath of a lightning event, large induction loops as a result of the interaction between power lines and data lines pick up nearby voltage surges, overhead power cabling at the mercy of weather elements allow surges to travel great distances to various distribution systems, and wires running from the tower’s antennas to the base station (among others) also serve as conduits for spikes.

Since the infrastructure relies heavily on the use of sensitive electronic instrumentation and complex computers, without adequate protection, induced transient surges will destroy circuits in equipment connected to affected lines. This is why surge protection devices must be installed to avoid the associated costs of repairs, replacement, and downtime.

What are Surge Protection Devices, or SPDs?

The goal of protective solutions for a cell tower is to prevent destructive energy from damaging its sensitive equipment. Surge protection devices as discussed in this article are not a defense against direct lightning strikes. Instead, SPDs protect against the induced effects of lightning.

Of course, the first critical measure for lightning protection is to capture and channel lightning current towards the earth, in a path that avoids sensitive equipment. Lightning conductors attached to the highest point of the cell tower’s structure are key to ensuring the greater part of the energetic disturbance is diverted.

On the other hand, SPDs are fitted on mains power distribution boards, signal/data lines, control systems containing sensitive equipment like microprocessors, and any other expensive equipment critical for operation.

In selecting components to make up surge protection devices from the current state of technology, designers must consider features including speed of response and current handling capability. Also, the device should not interfere with the normal operation of the protected system.

Some candidate components are strong in one of these parameters but deficient in another. Therefore, for effective protection, SPDs typically feature a combination of components, in the form of a hybrid circuit.

Lightning-induced voltage transients can rise from zero to several volts in as quick as microseconds. Unfortunately, fuses and circuit breakers simply cannot respond fast enough. Popular and effective components used in SPDs for suppressing induced transient are generally one of the following:

1. Gas discharge tubes (GDTs): A gas mixture is trapped in a sealed glass enclosure with two electrodes. In the presence of a high voltage spike, the electrodes become ionized and start conducting electric current.

GDTs are relatively slow to respond but can handle more surge currents for their size compared to other components. Their slow start, however, means that the circuit they are protecting will experience high voltages before the GTDs come to the rescue. An additional drawback is their finite life expectancy. They are therefore suited to handle many small transients or a few large ones.

2. Metal oxide varistors (MOVs): These are solid-state semiconductors typically containing sintered zinc oxide, which can conduct large currents in the presence of large voltages exceeding its rated voltage. In the process, they divert the surge current away from the protected load.

Selected appropriately, MOVs can limit voltages that are about 3 to 4 times the normal operating voltage of the circuit they are protecting. A disadvantage of MOVs is similar to GDTs, their finite life expectancy. With each surge event, their clamping voltage decreases. Beyond a 10% decrease, MOVs are termed functionally degraded.

3. Transient voltage suppression (TVS) diodes: Often referred to as avalanche diodes because of their operating principle on a microscopic level, these semiconductors offer the fastest response action of the protective components (picoseconds).

They are generally characterized by lower energy absorbing capability in comparison. However, the life expectancy of TVS diodes is impressively long when selected correctly. As expected, if exposed to surge events exceeding their capacity, they may fail as a permanent short circuit.

MDE Semiconductor, Inc. manufactures a range of TVS diodes of exceptional quality. From telecommunications infrastructure to remotely piloted aircraft and electric vehicles, our products are used in numerous industries where they help protect key components.

4. Thyristor surge protection devices (TSPDs): These are special solid-state semiconductors that share some characteristics with GDTs to protect against transient overvoltages, although they respond faster. Once triggered, the low clamping voltage (analogous to a GDTs ionized and conducting spark gaps) allows surge currents to flow with limited heat dissipation in the device.

5. Carbon block spark gap overvoltage suppressor: Spark gaps are among the oldest protective measures against power surges in electrical circuits in telecoms equipment. Carbon block surge suppressors like GDTs feature two electrodes, but since they are exposed to the air, are affected by atmospheric conditions.

The gap between the carbon rod electrodes dictates the voltage at which the spark will transfer unwanted transients to the ground. Because their operation generates a spark, these components are not applicable in potentially explosive environments.

6. Series Mode (SM) surge suppressors: These operate differently from the components already mentioned because they are not based on materials that wear out after multiple surges. Like their name suggests, series suppressors don’t divert surge currents or voltage but suppress them using a combination of inductor, capacitors and inductors. These elements slow down the energy spikes, essentially filtering the output to acceptable voltage and current levels for the load.

SMs are typically bulkier and heavier compared to parallel load shunting components, but they have longer service lives when installed correctly. The installation, however, requires disruption to the electrical power feeds to be placed in series.

MDE Semiconductor, Inc. has a powerful range of products which include the MAX-40 series of TVS diodes, which have been engineered and tested to protect critical equipment from failure. Our specialized knowledge at manipulating semiconductor components helps us create a wide range of surge protection solutions and customer-specific designs for highly sensitive equipment as found in telecommunications infrastructure. Visit www.mdesemiconductor.com for more.