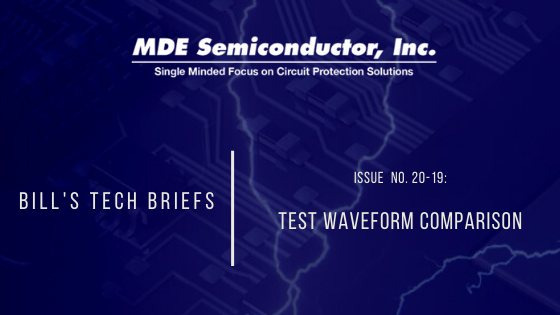 Various Test waveforms are used to test TVS diodes and also evaluate products that are protected by TVS devices.

The typical waveforms used are described and shown here.  Also, the approximate energy can be determined of each so that waveforms of one Pulse type can be compared to another. It is not always possible or convenient to test a TVS component when trying to apply them to a particular application but having some data and guidance can permit a designer to make a better selection.

It can also be estimated for one application by having test data and calculations of energy so the choice and decision can be more exact or have a better chance of success.

More than 20 years ago this means of estimation was developed in conjunction with USF and was used successfully in fabrication of surge generators and developing products.

The equations are as follows, now the results are approximate but are useful in comparing products and tests.

This equation is the result of simplifying a complex equation used in the approximation of the energy.

Also, when comparing waves it is important to note a pulse may have a smaller t but the peak pulse that is used to test may be smaller than the required device or chosen device.

Always review the need and the peak wave at test to ensure the best device is chosen.

This Tech Brief is brought to you by MDE Semiconductor, Inc. – your source for Surge Protection products. We value your feedback to enable us to supply better products and assist our customers to easily solve their problems.