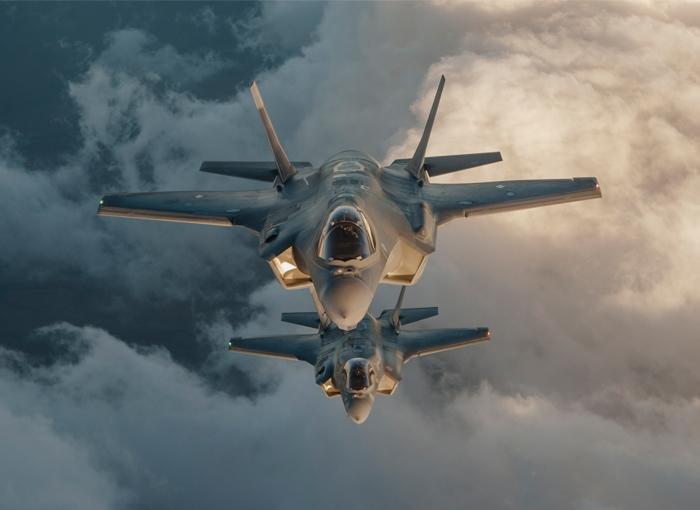 When lives are on the line, what critical components do the leading aerospace engineers rely on to protect the complex circuitries on board the world’s most-powerful fighter jet?

The answer is the 5.0MLJ12A TVS Diode from none other than MDE Semiconductor, Inc.

In 2014, Lockheed Martin was challenged with re-designing the F-35 Joint Strike Fighter Aircraft for the US Military (contract N00019-14-0002). The design was to include major technological upgrades to the stealth multi-role fighter in order to increase their effectiveness at ground attack and air-superiority missions.  The overarching goal is to replace the majority of the aircraft for all branches of the US Military with that of a universal design with three variants specific to each branch.

Finding the right surge protection equipment was critical to the new state-of-the-art circuitry on-board.  When a lightning strike, power surge, or operational imbalance could destroy the high current electronics system, lives are on the line and mission-critical information is hanging in the balance. That’s why the engineers chose the 5.0SMLJ Series of Surface Mount TVS Diodes to protect the redesigned aircraft electronics from dangerous power surges.

Find out more about the technological advances in the F-35 aircraft, how the military aircraft electronics are at risk for critical voltage transients, and how the 5.0SMLJ12A TVS diode functions as high current circuit protection on board.

About the F-35 Lightning II

The F-35 Lightning II is a 5th Generation fighter aircraft that combines the speed and agility typically associated with fights and advanced stealth capabilities. Additionally, the F-35 incorporates fully fused sensor information and technology that allows for sustaining operations for longer periods of time. Its network-enabled operations are part of the military initiative to effectively use information technology to enhance our military effect.

The three variants of the F-35 replaced crafts previously used in three branches of the US military: the Air Force’s A-10 & F-16, the Navy’s F/A-18, and the Marin Corps’ F/A-18 & AV-8B. The F-35 will also replace those previously used in allied forces of at least 10 other countries.

The new fighter technology couldn’t have come soon enough for our military and those of our allied forces. The US Air Force, for one, has been due an upgrade in its aircraft – the majority of the fighter inventory are over 25 years old since a huge inventory cut in 1990.

What makes the single-seat, single-engine aircraft so significant to the advancement of our military is its versatility and reliability in a variety of missions.

“One of the best capabilities of the F-35 is our capability to see and detect everything that exists over the ground the sea and in the air and share that information through our Multi-function Advanced Data Link, we call it MADL. We can share information from one F-35 to the next. Everyone in our formation sees what everyone else sees. Situational awareness is more elaborate and more comprehensive than anything we could have imagined in a legacy airplane. We see everything out there and share it.”

The F-35 Lightning II has been widely claimed as the most flexible, technologically sophisticated fighter ever built. Its profound tech features represent a coming-together of the world’s leading aerospace companies, including:

With advanced data collection, analysis and sharing abilities, the fighter is not just lethal as a solo act, but it also enhances the efficiency of the entire battery of surface and ground-based assets.

As microchips become smaller and smaller to accommodate more and more complex capabilities, their components are increasingly sensitive to the smallest variations in electrical current. Though all electronics are susceptible to damage from voltage transients, power spikes, and PSQ problems, the complex circuitries on-board military aircraft come with a significant consequence of sustaining damage.

Electronics can experience a power surge during operations switching, power anomalies, short circuits or a blown fuse. Lightning strikes, which are relatively common to aircraft, can cause surges resulting in a varying degree of damage. Additionally, electrostatic discharge (ESD) can occur when electrostatic charges accumulate between aircraft during air-to-air refueling operations.

In the event of a catastrophic failure, the on-board electronics are rendered useless to military personnel on board. A latent failure may seem less severe, but weakened electronics can, over time, cause total system failure. This type of damage severely affects weapons systems performance.  The added insult in a latent failure is the extremely high relative cost for repair, as these failures are rarely caught during inspection.

Even in a failure that isn’t significant enough to cause total failure of the equipment, there could be intermittent gate leakage that causes loss of software or data storage malfunction.  For example, components in F-18 aircraft are controlled by electronic microchips so sensitive that a static charge of 30 – 50 volts of static electricity may cause the equipment to malfunction during deployment or combat missions, rendering the fire control and navigation systems useless.

For the F-35 Lightning II Joint Strike Fighter, Stockheed Martin turned to the experts at L3 Technologies for components of the cockpit display.

In addition to state-of-the-art, lightweight, powerful lithium-ion batteries to act as a back-up control in an emergency power failure, the jets are equipped with surge protection from a surface mount TVS diode from MDE Semiconductor, Inc.

The 5.0SMLJ Series is a single TVS diode with low inductance and excellent clamping capability.  They provide a working peak reverse voltage from 5V up to 170V and a 5000 watt peak pulse power.  They are preferred for their fast response time: less than 1.0 ns for unidirectional devices and less than 5.0 ns for bidirectional devices from 0 V to minimum breakdown voltage. They are low-profile, designed in a flat configuration, and intended for surface mount to maximize board space.

At the Armed Services Committee hearing SD-G50 on the F-35, it was said,

“Our adversaries today are full-speed ahead in accelerating the development of significant military  capabilities to thwart ours, both air to air and air to ground.  The F35 is absolutely necessary now and in the future to give the nation options to take an aircraft anywhere on the face of the earth in a time of our choosing and be survivable and hit a target. I don’t believe there is any other aircraft today that can do that.  Only the F35 can do it. “