Military Tanks That Run on Electricity? High Power TVS Diodes Can Help with That! 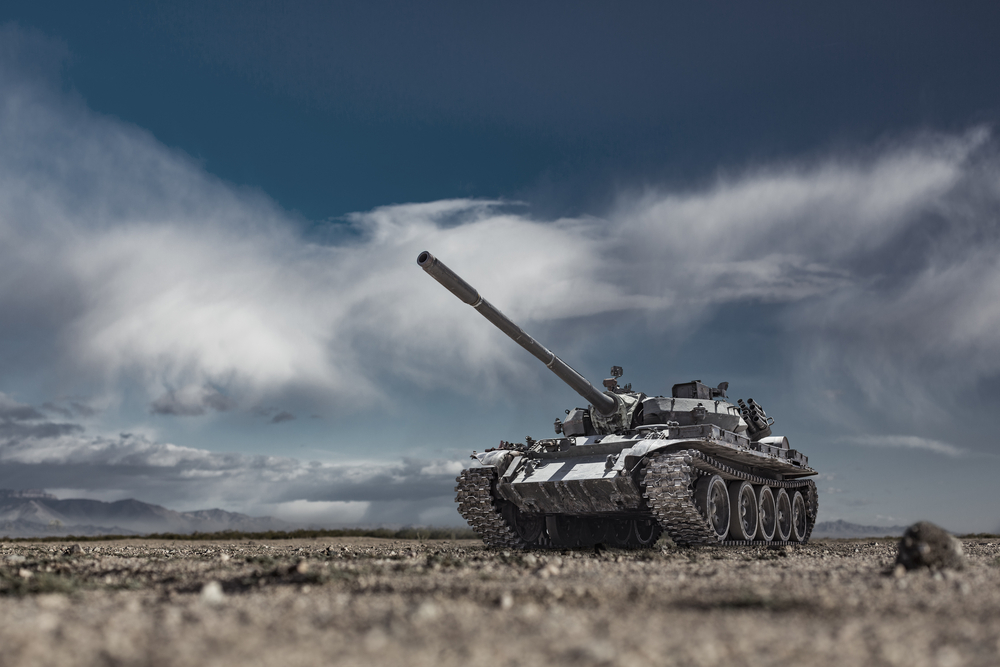 Military Tanks That Run on Electricity? High Power TVS Diodes Can Help with That!

In a few years, the US Army could be rolling out battle tanks that run on electricity to a significant extent, if not fully. If it can be demonstrated that no loss in operational effectiveness will be experienced, the electric tank presents numerous benefits.

First, it would decrease the demand for gasoline on the battlefield. Every year, the US armed forces consume more barrels of oil per year than most countries. In 2017 alone, the army purchased $947 million worth of oil [1]. Reducing its dependence on oil will make the military less susceptible to price hikes. It will also reduce the logistical difficulty and risk to lives associated with delivering tankers of fuel.

Another benefit could be successful tactical strategies as a result of increased stealth (reduced noise and energy combined with the material of construction and shape of the tank). A battle tank would perform surveillance with the engine switched off and without giving its position away.

In battle tanks, where the reliability and performance of electrical equipment are paramount, a key component helps protect the complex circuitry from power anomalies, namely, high power TVS diodes. MDE Semiconductor, Inc. is pioneering innovation to meet the ever-changing demands as the US military embarks on advancing the capabilities of its tanks.

MDE Semiconductor, Inc. manufactures high power TVS diodes to withstand harsh environments where vibrations, shock and electromagnetic interference, typical of military applications, are expected. Specifically, our MAXPak Series Power TVS Diodes are high current bidirectional diodes for high power applications up to 288,000 watts. Their fast response times, less than 1.0 μs, is advantageous for high-performance environments. They are designed with a limited footprint to maximize board space and satisfy MIL-STD 1399 Section 300 B requirements for military applications. 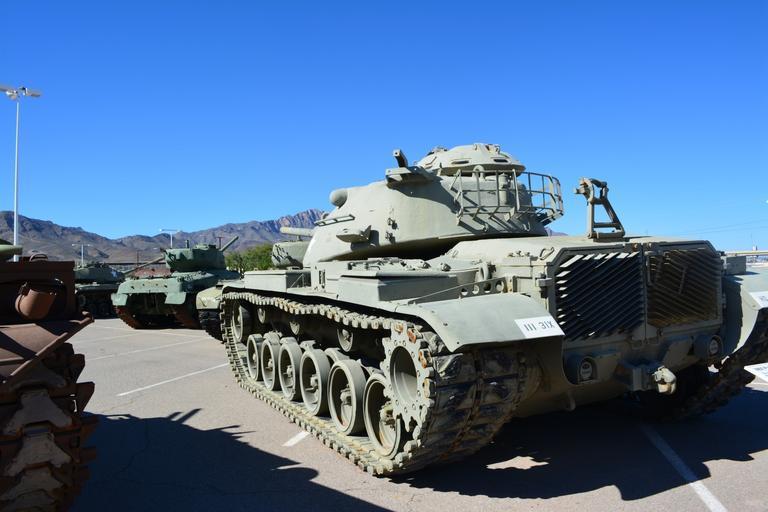 The Military Battle Tank, the Right Combination of Firepower, Protection, and Maneuverability

The imposing frame of the military battle tank was a great show of superiority when it appeared in the First World War. Combining guns, tracks, and armor, it was designed to resist small-arms fire, cross trenches, flatten enemy fortifications while traversing difficult terrain, and breaking the stalemate of trench warfare.

Over the years, its recognizable form included the commanding rhomboid-shaped body, thick armor plate, tracked wheels, and the large gun mounted on a rotating turret. The objective remained to advance on the front-line while withstanding heavy fire and protecting the lives of the soldiers inside. To overcome the limited visibility, soldiers used periscopes and a combination of imaging technologies to assess the environment. The tanks needed to accelerate quickly and engage with precision.

America’s answer to the battle tank, the M1 Abrams was designed by Chrysler Defense, now General Dynamics Land Systems. A few versions later, the rhomboid structure remains to a large extent, but thanks to advanced technologies, a few features have been incorporated or upgraded such as multifunction camera systems, sensor systems, meteorological sensors advanced firepower, advanced control systems, and software-based electronic systems.

These components have led to improved operational performance. However, the systems responsible for the greater capabilities have increased the demand for power and electricity within the tank.

The original M1 Abrams Main Battle Tank dates back to the 1980s and was designed to provide formidable tactical support to the ground forces of the US Army. Since then, more than 8000 tanks have been produced and delivered for the US Army and Marine corps and several US Allies.

Three versions of the tank have been deployed, namely the M1, M1A1, and M1A2. Each iteration delivered an advancement in one form or the other. Future versions in the coming decades will continue to accelerate the technological advancements for improved firepower, protection, communications, reliability, maneuverability, and fuel efficiency.

Naturally, elaborate details of the upgrades being made to next-generation military tanks are unavailable for security reasons. However, based on publicly available records, some insights can be gleaned from recently awarded contracts to the top R&D and Defense Contractors including General Dynamics Land Systems, Lockheed Martin, Moog, GS Engineering, among others. And more electrification is detailed in the proposals.

Donald Sando of the Maneuver Center of Excellence explains:

Efforts are ongoing to construct and deliver upgraded M1A2 SEP v3 Abrams Tank prototypes in 2022/2023. As part of the contract with GDLS, it will later transition to the v4 upgrade scheduled for production in 2023. Designed to be more lethal and better protected, its impressive features include:

From the above upgrades, the increase in power requirements is evident. The assortment of sensors, communication systems, and computing will put demands on the tank’s power systems. As a result, careful consideration should be placed on adequate protection against transients and overvoltages, and high power TVS diodes play an important role. 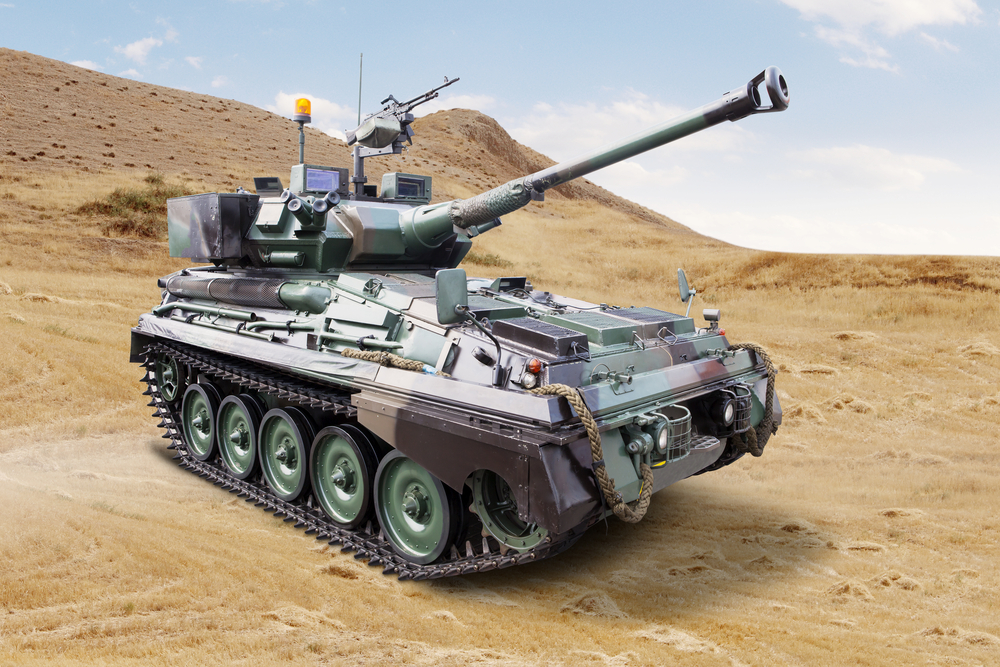 With components operating at power levels ranging from a few hundred kilowatts to megawatts, at the foundation of a military tank’s electronic system are power semiconductors. These devices are selected for their higher switching speeds and lower losses while being able to operate at high temperatures.

Advancements in this area have made miniaturized devices and packages possible which are advantageous to military applications where space and weight are to be minimized.

However, these devices are susceptible to transient effects where short pulses of energy lasting in the region of 10 -100 microseconds can cause voltage and energy spikes that can damage them. In addition, they can be vulnerable to electromagnetic interference (EMI) which can lead to signal inaccuracy. The high-precision operations military tanks are called upon to deliver cannot afford that kind of failure or unreliability.

The complex interconnected electrical and data networks mean that transients caused by power anomalies, short circuits or during operations switching can propagate throughout the connected circuits. For example, target observation and surveillance that involves interaction between multifunctional sensors together with computational processing, or modern communications systems that can be vulnerable to interference from neighboring electronic equipment.

Damage to on-board electronics that can render them useless puts the lives of military personnel at risk, not to mention possible mission failure. Therefore, incorporating adequate protection from power surges and ensuring signal protection is critical to maintaining the integrity and performance of operations.

Incorporated into the design, high power TVS diodes help overcome these issues. They act as clamping devices that will absorb overvoltages and protect the power electronics and downstream loads from destruction. When selected properly, their performance does not degrade after each transient event they experience, thereby minimizing lifecycle costs.

MDE Semiconductor, Inc. offers a wide range of high-performance semiconductors which meet the rigorous environments required on military missions while keeping lifecycle costs at a minimum. We aim to build on our record of success and continue to execute on any initiatives that will provide support to military applications.

Whether your need is for minimum space or maximum capability, MDE Semiconductor Inc. will work to meet your exact application. Through customization, we are able to satisfy customers wanting to integrate complex circuit hardware to produce high-end products.

When it comes to military tanks consisting of high-performance observation, navigation, detection, and self-protection systems, our extensive portfolio of products makes it possible to suit a diverse set of needs. High power TVS diodes are a vital part of ensuring such capabilities without impinging on the limited space and weight requirements.

Our MAXPak Series Power TVS Diodes are high current bidirectional diodes for high power applications up to 288,000 watts. Their excellent clamping capability and low inductance makes them advantageous. They provide fast response times, less than 1.0 μs, from 0 V to breakdown voltage. In addition, they are designed with a limited footprint to maximize board space and satisfy MIL-STD 1399 Section 300 B requirements for military applications to withstand harsh conditions such as high temperature, shock and vibration.

Looking to the future with the interest expressed by the US Army for military tanks to also generate electricity, the grand ambition can become a reality if it is supported by the right technological know-how.